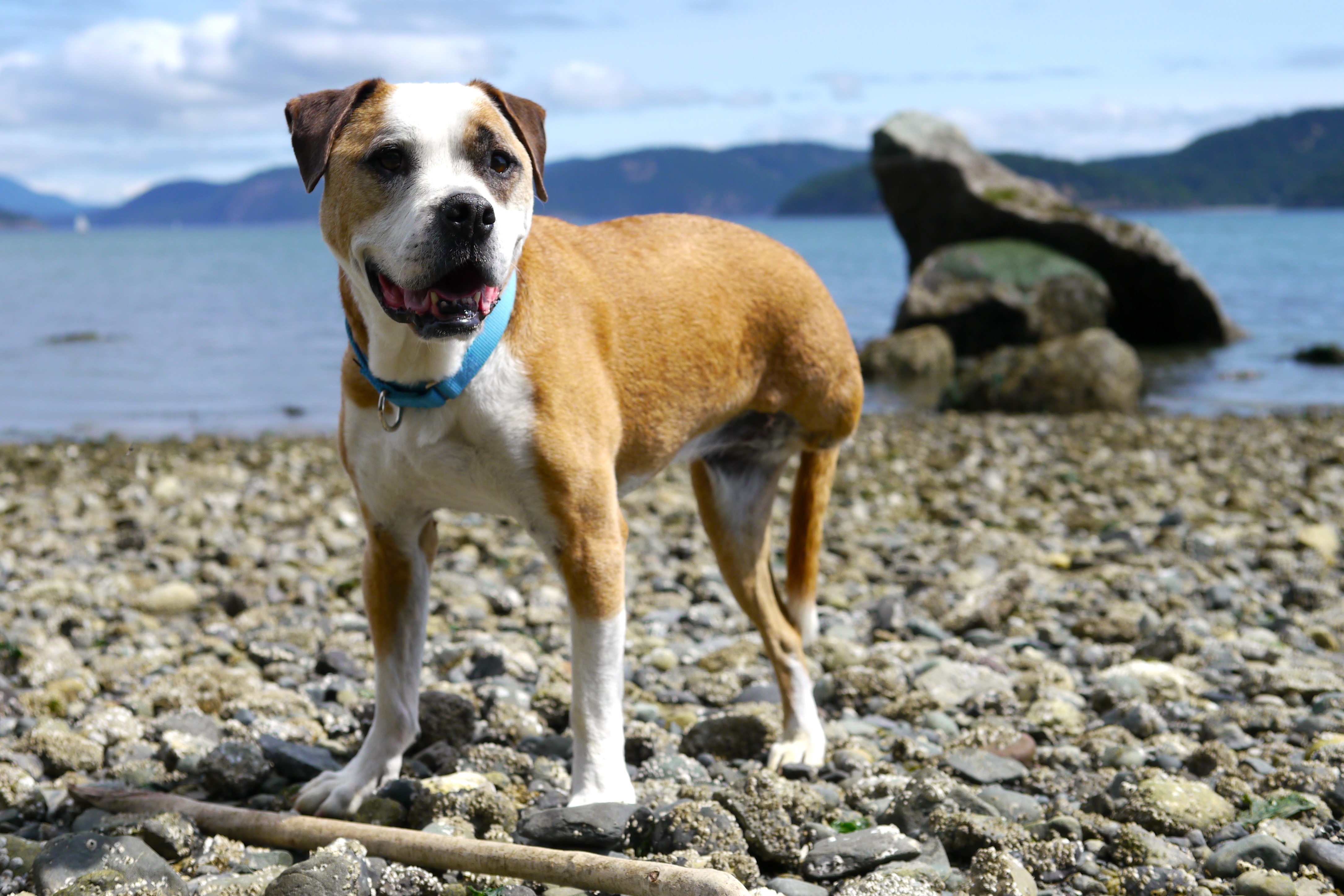 I own a dog. Own? No. Share my life with. Rescued in LA when she was 2, she is now close to 11. She is an amputee and a cancer fighter, fending of the nastiest strain, osteosarcoma, with grace and tenacity. And more than a bit of gas.

“Cancer. She has cancer,” said the vet. It knocked the air right out of me. I remember feeling that way once beofre as a boy on the soccer field, run over by a bigger kid, flattened, and without my wind.

“Cancer. She has cancer,” I confessed through tears to friends and family. It never once occurred to me that “putting her to sleep” was an option, because it wasn’t. It just. Wasn’t. An option.

We went to see specialists. An oncologist and a surgeon. We decided on amputation (the rear left leg had been overtaken by a tumor, and was wasting away), along with a low-dose oral radiation pill. She was given 6 – 12 months to live. They told me my best friend had maybe 6 months to go. This was September 2011. The months that followed allowed me to witness the strength and will of a soul determined to live. And, yes, I am sure it helped that we smothered her with love. 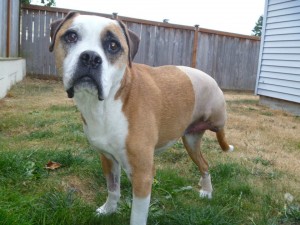 Not only has she blown past the 12 month mark (surgery was September, 2011), she has made the most of life as a feisty tripod dog, and we have gone out of our way to provide her with excellent adventures! One of her favorite places is Lopez Island, we have visited twice since her surgery, and she has accompanied on many pack walks with “my pups” (I am a dog walker by day). 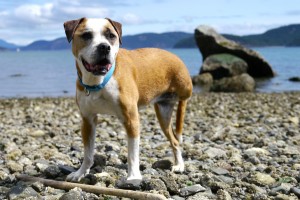 For the past 15 months she has been walking, jogging, fetching, and playing around on three legs. Her spirit has never faltered, and for a handicapped pup, she moved with efficiency and power. Here is a video of her in action!

About 3 weeks ago, Vida stopped using her right rear leg. She was also in much more pain. I remember, it was a Tuesday morning when we woke and she would not budge. By Tuesday night, she lay trembling in my arms, moaning and scared, as tears dumped from my face. Angela joined us, and we sobbed, then took her straight to the emergency vet. I think we both thought that this was the end.

During the car ride, as I cradled her in my arms, she stared into my eyes the whole time and was completely still. Not shaking, not whimpering. Now, I am a dog trainer not an “animal communicator,” but she seemed to be saying to me, “I trust you completely. Thank you.” By the time we got her to the vet and put her on the gurney, she had a bit of light back in her eyes. And we even got a few tail wags out of her. We took some X-Rays. Severe arthritis in the spine and hip. No new tumors. Nothing else “significant.” 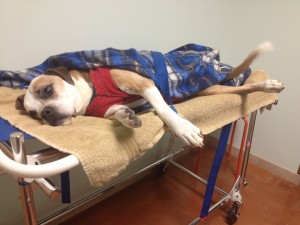 Yes, her tail is wagging.

We brought her home with new pain meds and not much of a plan. Everything happened so fast. On the previous day, Monday, she was up at the same vet getting her routine blood draw and was walking well. Now…Well, if nothing else, over the years I have learned to accept what is without judgement. It just is. She has more pain now and it’s quite hard for her to get up. Fine. Accepted. Grudgingly. Cue the misery. For me, mostly, but each day I also evaluate how things are for her. I made a promise to her that I would not “keep her alive” just so I can be spared a bit of pain. And, believe me, she keeps telling me, “Not yet.”

Here is a little video shot a few days after that terrible Tuesday.

Plan. We needed a plan. She was on more meds, which helped. And, we got some great pointers from Angela’s mom about how to mitigate the effects of arthritis with heat. Add to that some awesome heatable rice-stuffed-socks from our friend Katy (sure, it sounds odd, but these things really heat up and provide relief), and a dog bed with an electric warmer from my mom, Sue, and we have the beginning of a road to recovery. 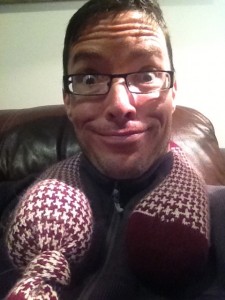 Ok. More pain meds. Less pain. A good appetite. Tail wags. Still, very little walking without assistance. I found that by looping a leash underneath her hips, she was easy to assist outside for elimination. So that was good. And, she was also getting a lot of attention and support from family and friends. She even scored two new toys from Lisa and Meg! 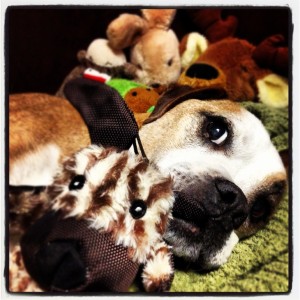 Vida and her toys!

Now, I realize that toys and love and heat alone will not a doggie repair, so we hooked up with Dr. Johnson at Seattle Animal Surgical Center (this is where her oncologist, Dr. Tripp and her surgeon, Dr. Aguila are, too – both great), and began physical therapy. Hydrotherapy was suggested, and our faces dropped. We tried swim therapy in the past, when the now removed left leg began to weaken, and that experience reconfirmed Vida’s belief that she is a sinker not a floater. This dog is not a fan of the water! But, we agreed to give it a try again, especially after seeing the machine. The dog gets in and then the water rises to support the weight of the dog, which makes it easier to walk on the conveyor belt floor. Add a lot of treats, and you have a Vida who is ready to work! We have gone twice, and she is really gaining strength! 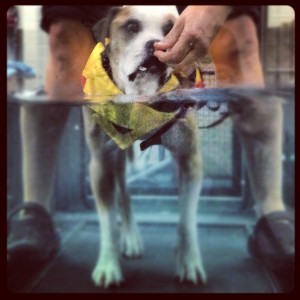 Vida in the “tub.” Instagrammed.

After the first session in the tub, Vida was pretty wiped out, trembling that evening. But, the next day she was more mobile than ever, and even did some assisted fetching with me in the man cave. Woohoo!

This past week, we had two (well, three) other major Vida events. 1. She had acupuncture for the very first time with Dr. Gomez (our “regular” vet), we bought her a cart (still trying to make it work), and she had her second go at hydrotherapy.

Last night we played fetch. Indoors. And I did not have to assist by holding up her rear end with a leash. Today, not only did she pick herself up and out of her exceedingly comfortable dog bed in the man-cave to join us in the living room, but she played fetch again, got sassy with her sister (Lily), and regained the strength to roll on her back for belly rubs! 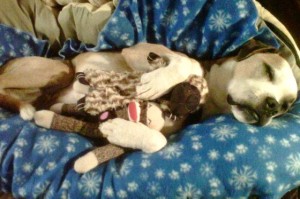 Living and caring for this dog with my wife Angela (and with the support of family and friends) has taught me so much about myself. Specific to my path as an artist, Vida has taught be to stand tall in the face of adversity and to never give up.

Thank you for your support and concern. 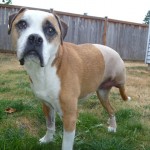 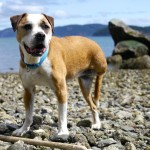 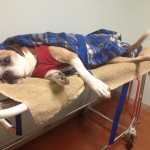 Yes, her tail is wagging. 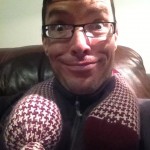 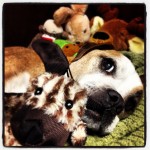 Vida and her toys! 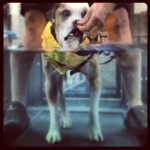 Vida in the “tub.” Instagrammed. 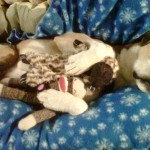 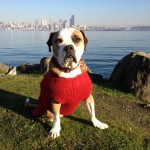 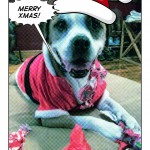 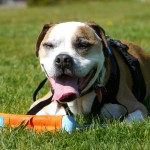 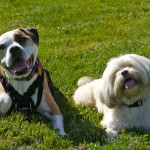 Vida and her sister, Lily. 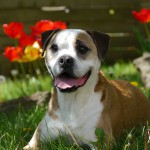 Vida in our yard with tulips. 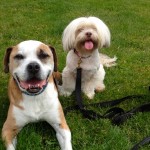 Vida and some buddies. 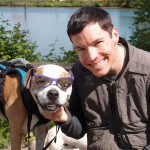 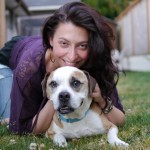 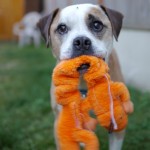 Vida and a toy. 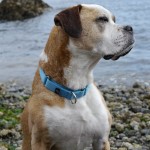 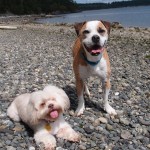 The girls on Lopez.